(The article is reposted from GamesIndustry.biz)

Starlink: Battle for Atlas was a big risk. We may have mentioned this before.

Launching a new IP is risky at any time of year, but do so within the same month as Call of Duty, Assassin’s Creed, and that little-known cowboy outing from Rockstar Games is bold to say the least.

Perhaps it was to be expected then that Ubisoft’s sci-fi toys-to-life escapade failed to set the charts on fire and has found itself heavily discounted in the past couple of weeks as retailers try to clear their stock.

Yet from this lacklustre performance, there was a small success story: the Switch version, despite the far superior install bases of both PlayStation 4 and Xbox One, was the best-selling SKU – and not by a small margin. 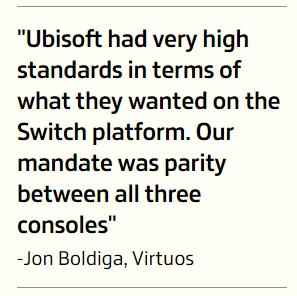 In the UK, for example, 82% of the game’s first-week sales were accounted for by Nintendo’s platform, while market leader PS4 only took 10%.

The reason for this is no mystery; at E3 2018, Ubisoft announced a collaboration with the platform holder that would see exclusive content and toys built around the Star Fox franchise in Starlink on Switch.

As playtests and reviews emerged, even the media referred to it as an honourary Star Fox game, both in tone and gameplay. Yet this Star Fox game was not made by Nintendo, or even Ubisoft – it was developed by Shanghai-based studio Virtuos.

While the base game was developed by Ubisoft Toronto, Ubisoft turned to Virtuos for the Switch version. The company has worked with Ubisoft on multiple projects in the past, even handling the Assassin’s Creed: Ezio Collection a few years back, so general manager Elijah Freeman tells us it was a “natural reach” for the publisher to employ its services again.

To begin with, it was a straight co-development partnership on the Nintendo port, with the work being handled in Shanghai and no mention of spacefaring foxes. 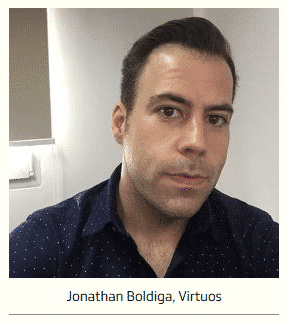 “It was extremely technically challenging,” senior technical director Jonathan Boldiga tells GamesIndustry.biz. “Ubisoft had very high standards in terms of what they wanted on the Switch platform. Basically the mandate for us was, ‘We need parity between all three consoles’.

“Obviously, the Switch is a great machine but we had to do a lot of work to make sure we could keep visual parity between Switch, Xbox One and PS4. We did a lot of work on rendering optimisations, multi-threading, and trying to squeeze the most that we could out of the CPU. Lots and lots of data compression to fit into memory – you name every trick, we tried it.”

Parity seems something of a harsh requirement given the significant difference in power between the Switch and the other two consoles. Both Xbox One and PS4 are built to deliver the highest definition visuals possible, while Nintendo’s device is in some ways running on previous generation technology.

“I think you’re looking at it upside down,” Freeman says. “Switch is probably the most amazing handheld out on the market and that’s the only reason we were able to hit these higher parities that normally you wouldn’t.”

Boldiga, meanwhile, points out the smaller screen of the Switch in handheld mode did give Virtuos some advantages: “Some of those post-processing passes for Xbox One and PS4 aren’t really necessary on Switch when you’re in handheld mode because the fidelity isn’t going to come through. There are tricks you can do there to avoid certain things. Plus, on a smaller screen you don’t have to worry about anti-aliasing as much because it’s not as noticeable, but when you’re on a big, high-def, 1080p screen, obviously it’s a lot more noticeable. So you can sort of use different anti-aliasing techniques to speed things up as opposed to some of the more expensive routines. 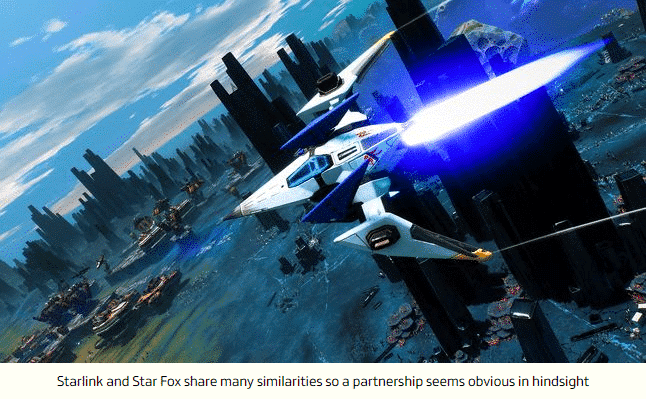 “It was definitely a challenge. There was a lot of late nights and hair pulling, but at the end I think what we were able to deliver is probably one of the best-looking Switch titles out there.”

And then, midway through the project, Virtuos was informed of the Star Fox collaboration with Nintendo. 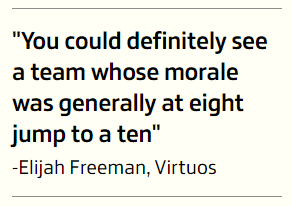 “The entire team was extremely excited,” says Boldiga — who, by pure coincidence he insists, is wearing a Star Fox hoodie as we speak to him. “Just me personally, I can still remember the day I bought the Super Nintendo version of Star Fox, I was in Toys R Us when I purchased it… That memory is very vivid for me. Being able to actually work on a Star Fox product was a huge moment for me.

“It also solidified the team, knowing that what we were doing, that our contribution to the product was going to be very, very important – especially because it’s become the showpiece or centrepiece for the franchise. It was a huge boost for us.”

Freeman adds: “You could definitely see a team whose morale was generally at eight jump to a ten. People were excited, staying late and coming in early.”

The actual design work on the Star Fox elements was done across Nintendo and Ubisoft, before being passed to Virtuos to implement. But while the Shanghai studio did not get much in the way of creative input — as can be the case with some co-development projects — it did communicate regularly with both Ubisoft and Nintendo.

“The big reviews were done at Ubisoft – we’d put a build together for them, and they would present it to Nintendo,” Boldiga explains. “But we also have a pretty strong connection with Nintendo, having done so many remasters for all these different Switch products. So they actually come and visit us fairly frequently.” 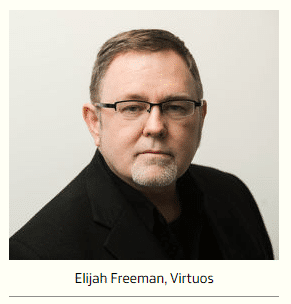 Freeman adds: “We actually have an open desk for Nintendo, here.”

Virtuos has previously developed the Switch versions of LA Noire and Dark Souls Remastered but this is the first time it has handled anything with a Nintendo franchise. And it’s the use of that franchise that Virtuos believes put a port ahead of the lead versions when it came to Starlink’s sales.

Freeman says that Starlink’s success on Switch just shows how well the game’s concept is “aligned with the target audience of Nintendo” and that “it’s just perfectly acclimated to the platform”. Boldiga believes another element had a role to play.

“The toys are really cool,” he says. “They’re really, really well put together, really high quality. We have some here because obviously we needed them for development, and the quality’s really impressive, they’re not cheap.”

Freeman adds: “It lends a new level of engagement when you’re snapping on a new weapon and you can see it happen live. That’s really fun, being able to build your loadout on the fly.” 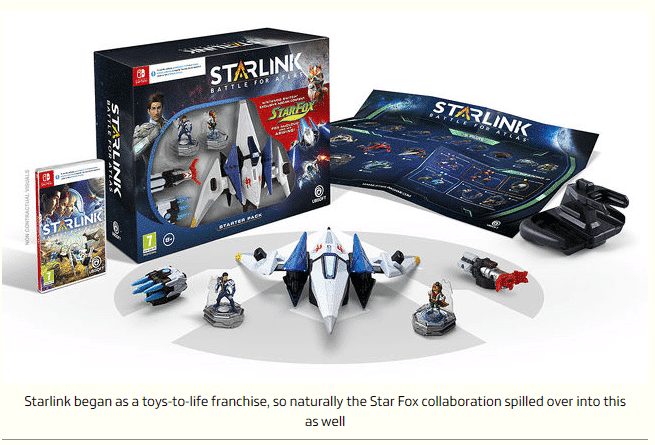 It’s easy to forget, particularly after the Star Fox reveal at E3, that Starlink is actually a toys-to-life proposition. The game is available to buy digitally without any need for the physical starter pack, and Fox and friends arguably shifted focus away from what the franchise was originally going to be built around.

But the Virtuos team believe the toys still have their place in the Starlink story.

“Ubisoft’s intent was always to support both having the toys and playing without them,” Boldiga says. “That was always part of our mandate. The toys add an extra element to the game, because they’re not just decorative, they have feedback, lights and sensors, and they have actual gameplay elements – they actually interact with the game, which is pretty cool.” 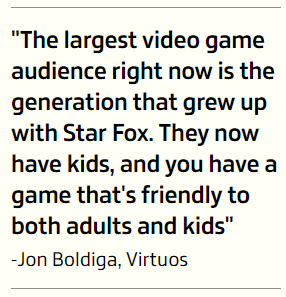 As we previously wrote, Starlink was perhaps the riskiest game to come out this Q4 because it’s the only major new IP trying to shout about the noise of other AAA blockbusters. And yet its most successful SKU is one intrinsically linked to a 25-year-old franchise – doesn’t this negate the potential of the new IP?

Both Freeman and Boldiga argue that it’s the use of that established property that helped introduce a nostalgic audience to the new world of Starlink, while simultaneously connecting younger players — those Ubisoft no doubt hope will become the earliest fans of its new franchise — with a gaming classic.

“If I think about it as a parent, I have an association with the character and I have children – so there’s a two-pronged approach to that marketing strategy that worked quite well,” Freeman says. “And yeah, there’s a resurgence in older games. You can see it because a lot of the gamers that existed have now grown up.”

Boldiga adds: “The largest video game audience right now is the generation that grew up with Star Fox. Those people now have kids, and you have a game that’s really friendly to both adults and kids. The co-op play, the toys and all that… once you have Star Fox involved, now you have parents who have a connection to that character, plus kids who might not have a connection to the character but it’s friendly and they have an interest in what the core of Starlink is all about. It really just gels together.”

More importantly for the team, it’s another successful collaboration with major games firms and has cemented the previous relationships with both Ubisoft and Nintendo.

“This has solidified Virtuos as a tier one partner with these groups, and I know that from the future projects [we’re collaborating on],” Freeman teases, unable to tell us which projects he’s referring to.

“Both companies are striving for future development to create these partnerships with trusted developers – and I think we’ve solidified that aspect of Virtuos being a co-developer with any of these games or projects.”