This article is part of an editorial series of Expert Talks by Virtuos, aimed at sharing the learnings and best practices in global game development and art production. In this instalment, Technical Director Xavier Rozé and Game Producer Paul Loumouamou talk about their exciting and challenging co-engineering project — Assassin’s Creed® Liberation Remastered.

A few years ago, Virtuos became involved in the adaptation of this legendary series, taking Assassin’s Creed® The Ezio Collection from PlayStation® 3 and Xbox 360 to PlayStation® 4 and Xbox One with post-effects improvements.

This time, Virtuos has a greater challenge — co-engineering Assassin’s Creed® Liberation Remastered. Technical Director Xavier Rozé and Game Producer Paul Loumouamou from Virtuos’ Paris studio are the project’s key players. They were excited to share their expertise on how this tough mission accomplished.

What role did the team play in developing Assassin’s Creed® Liberation Remastered? What do you think you and your Virtuos team brought into the game?

Paul: Our role was to adapt Assassin’s Creed® Liberation so it is playable on machines that are more powerful: Xbox One, PlayStation® 4 and PC. However, our main mission was to improve the game’s graphic level so that it would reach the visual quality of a modern next-gen title. We wanted to make sure this would match the visual benchmark of the machines it has played on, which are much more powerful than the console of its original game. To achieve this, Virtuos provided a lot of technical and creative expertise by implementing new graphics features such as Physically-Based Rendering (PBR).

Paul: We have had many successful projects that are similar to this and have accumulated a vast amount of experience in adapting games. But this time around, we modified even more things than on The Ezio Collection. In Assassin’s Creed® Liberation Remastered, we added more post-processes, reworked the rendering and improved the lighting. We even modified the gameplay with new features, such as free-aiming, and reworked many controls, like the canoe transportation system.

Xavier: We have also strongly enhanced existing surfaces to a much higher quality. We’ve integrated a dynamically tessellated water system to render swamps and seas with faithful real-time wave behaviors and implemented a parallax occlusion mapping method to bump the relief of the grounds, especially the snow surfaces. 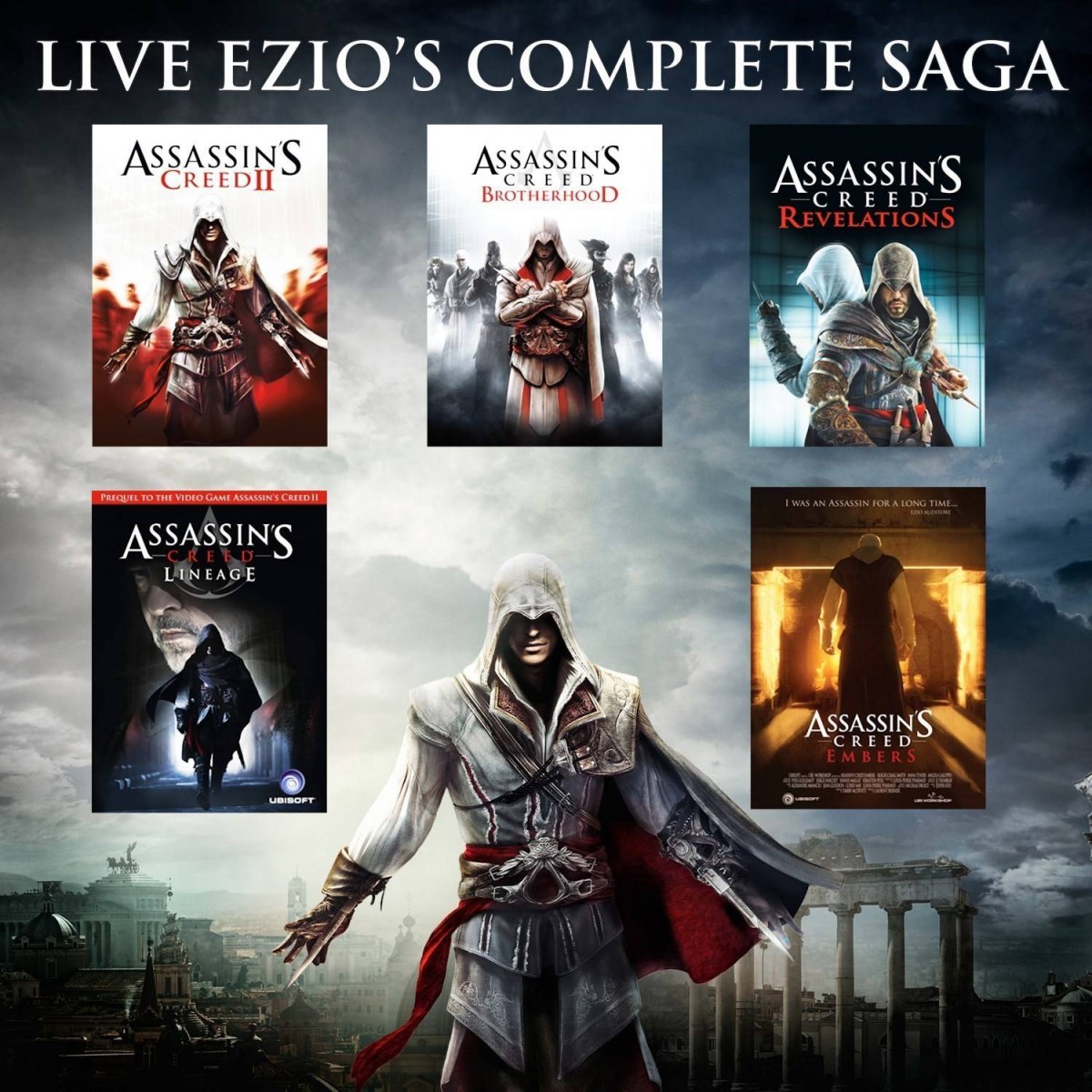 Paul: Yes, we started with the PlayStation® 4 and Xbox One version and we started working on the PC version after a few months, so all three platforms were being developed at the same time. Both console versions were almost identical from a gameplay and visual point of view, whereas the PC version was much more specific. We had to take into account the hardware gap between PC and other consoles to make sure all three versions delivered the same gameplay quality in different technical conditions.

What are the gaps and differences you mentioned between PC and consoles here?

Paul: The biggest technical difference comes from the hardware itself. PlayStation® 4 and Xbox One are the same for all users while PCs have many different hardware configurations. This difference required us to do a lot of testing to avoid problems linked to particular components. An example would be how NVIDIA and AMD graphics cards do not work the same way and can therefore cause different bugs. There are also other differences such as keyboard controls and the differing PC resolutions that have a significant impact on the game’s UI.

Have you worked on projects using Anvil engine before? What are the characteristics of this engine? What are the advantages and disadvantages of both proprietary and commercial engines from a development perspective?

Paul: Yes, we used the same engine for The Ezio Collection. Anvil has a “what you see is what you get” kind of philosophy as it’s similar to commercial engines like Unreal Engine 4 or Unity. Everything can be done inside the editor. It’s really helpful when you want to iterate quickly. Commercial engines are easy to learn and can work with many different types of games, but they can be harder to optimize and might not perform as efficiently as proprietary engines designed for specific types of game.

Xavier: Anvil has been designed with open-world in mind from the beginning. This allows the engine to support strong level content streaming without trouble regarding the framerate, the content density and the dynamic living environment.

Did the team encounter many iterations during the Assassin’s Creed® Liberation project? What types of iterations were encountered?

Paul: We worked closely with Ubisoft Barcelona, which worked in parallel on Assassin’s Creed® III Remastered. We worked together to improve the overall quality of the games and the harmony between the two. A good example of our iterations on Assassin’s Creed® Liberation Remastered is the PBR, where we had to constantly tweak the post-processes and lighting to take advantage of our new materials.

In recent years, due to the continuous improvement of hardware performance,Physically-Based Rendering has been widely used in real-time rendering of PC and console games. To what extent do you think this new rendering pipeline has changed the development?

Xavier: PBR is a new lighting model more accurately based on realistic optical formulas. This new technique has really spread with PlayStation® 4 and Xbox One. I think PBR has simply allowed the video game industry to enter a new age of visual quality because it creates a universal standard that all production teams can build on. PBR offers us the tools and metrics to ensure the player gets fully coherent rendering scenes which sublimate the intent of the original art direction. 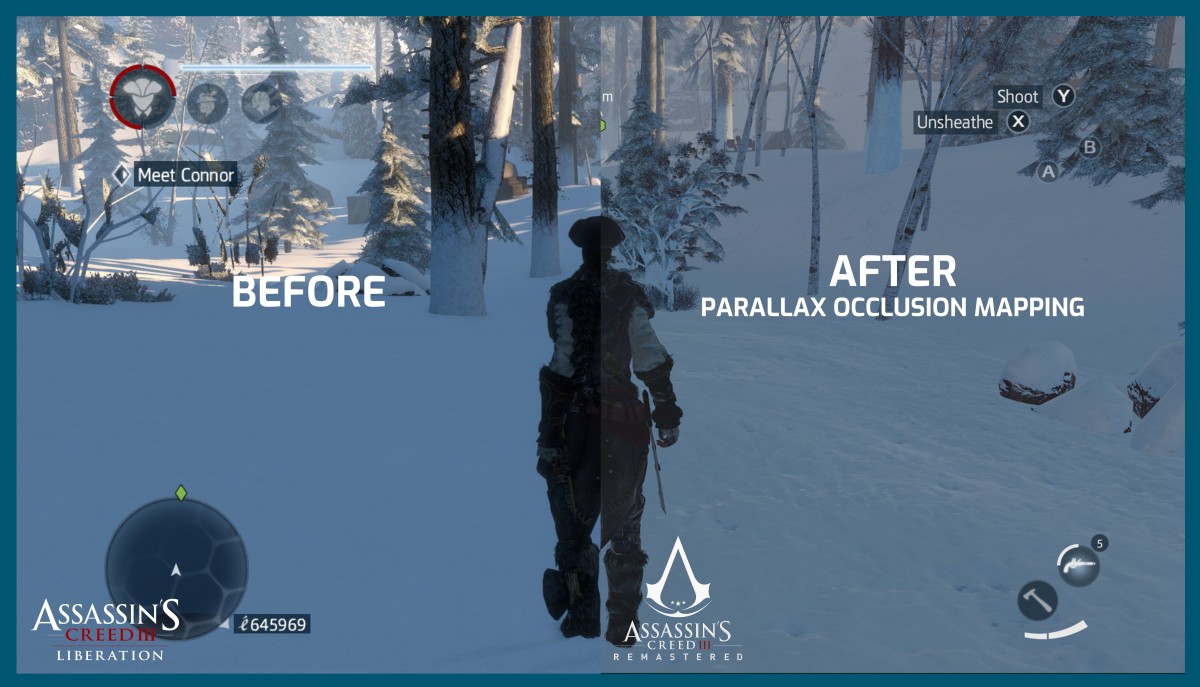 What was the unique thing about the lighting through PBR rendering?

Paul: The unique thing is the link between the lighting itself and the different reactions of the materials. We had to rework the lightning to take into account how our new materials would react in the same environments from the base game. It was crucial to understand and control all of these interactions to retain and enhance the original game’s atmosphere without heavy alterations.

Xavier: Lighting with PBR offers the opportunity to reveal what the materials really are and how different they look to each other. The player can immediately distinguish the metallic buttons on a leather coat and observe the oily skin of a character behind a silk scarf. This brings the player into a whole new level of immersion.

Were there any challenges with PBR rendering during the co-dev of Assassin’s Creed® Liberation Remastered?

Paul: We had two main challenges; maintain the artistic direction and implement PBR in the game in a short timescale and with a small team. To address the problem of artistic direction, we organized weekly reviews based on a side-by-side comparison with the old game. This enabled us to highlight what we might have lost compared to the previous version and to continually correct our trajectory.

Xavier: The biggest challenge, in my opinion, has been to make the use of PBR instantly obvious for any fresh eyes looking at it. During the production, we would compare the original and remastered versions and we got more and more familiar on the content we compared. We came to a moment where a comparison outlined a big difference for us, but this difference was almost not perceptible to a newcomer! There, we realized that we needed to become stricter in our review expectations, so we would never forget that the results must be obvious for all newcomers to the game.

Technology is influencing art, changing art, redefining art. How can technology better serve the art performance of gaming coherently? What do you think of the paradox between art and technology in game industry?

Xavier: As technology is advancing, it provides new possibilities and new ways of thinking. The art of tomorrow can emerge from unexpected combinations of practices issued from the technologies of today. This is the reason that pushes us to improve current technologies, so that we can give new means to artists for fully expressing their messages to players. This is a cycle where technology should always be seen as an opportunity and not as a constraint for art expression. Whereas technology is a fully determined flow of logic, art is a muddle of effects feeding human emotions according to a global intent. The challenge when building a game is combining the strict structure of technology with the messy nature of art. This will produce a more coherent and realistic experience for players to immerse themselves. Finally, the more present the technology, the more visible the art.

Xavier: Co-development is a marvellous opportunity to share experiences between our client’s teams and ourselves. This solution merges different team’s profiles, converging to a solid bulk of expertise and processes which become reliable enough to lead a project to a safe end.

Co-development only happens when needed, for a specific and well-determined target. Which lessens risks and streamlines the production effort thanks to teams experienced working in various situations and client expectations.

Thanks to Xavier and Paul for taking the time to share their valuable perspectives and stories. Assassin’s Creed® Liberation Remastered and Assassin’s Creed® III Remastered has been released for the PlayStation®4 computer entertainment system, the Xbox One family of devices including Xbox One X and Windows PC on March 29, 2019.

Ubisoft is a leading creator, publisher and distributor of interactive entertainment and services, with a rich portfolio of world-renowned brands, including Assassin’s Creed, Just Dance, Tom Clancy’s video game series, Rayman, Far Cry and Watch Dogs. The teams throughout Ubisoft’s worldwide network of studios and business offices are committed to delivering original and memorable gaming experiences across all popular platforms, including consoles, mobile phones, tablets and PCs. For the 2017–18 fiscal year Ubisoft generated sales of €1,732 million. To learn more, please visit www.ubisoft.com.

Founded in 2004, Virtuos Holdings Pte. Ltd. is a leading videogame content production company with operations in Singapore, China, Vietnam, Canada, France, Japan, South Korea, Ireland, and the United States. With 1,700 full-time professionals, Virtuos specializes in game development and 3D art production for AAA consoles, PC and mobile titles, enabling its customers to generate additional revenue and achieve operational efficiency. For over a decade, Virtuos has successfully delivered high-quality content for over 1,300 projects and its customers include 18 of the top 20 digital entertainment companies worldwide. More information at www.virtuosgames.com

Xavier Rozé has over 16 years’ experience in the game industry, with solid experience on performance optimization, especially in streaming open worlds on unreal engine 3&4, rendering and consoles development.

Paul Loumouamou has over 3 years of experience in the video game industry, with a dedicated producer and a gameplay programmer technical background. He has experience in team management, Scrum/agile methodology, gameplay development  and game producing on PC and consoles.