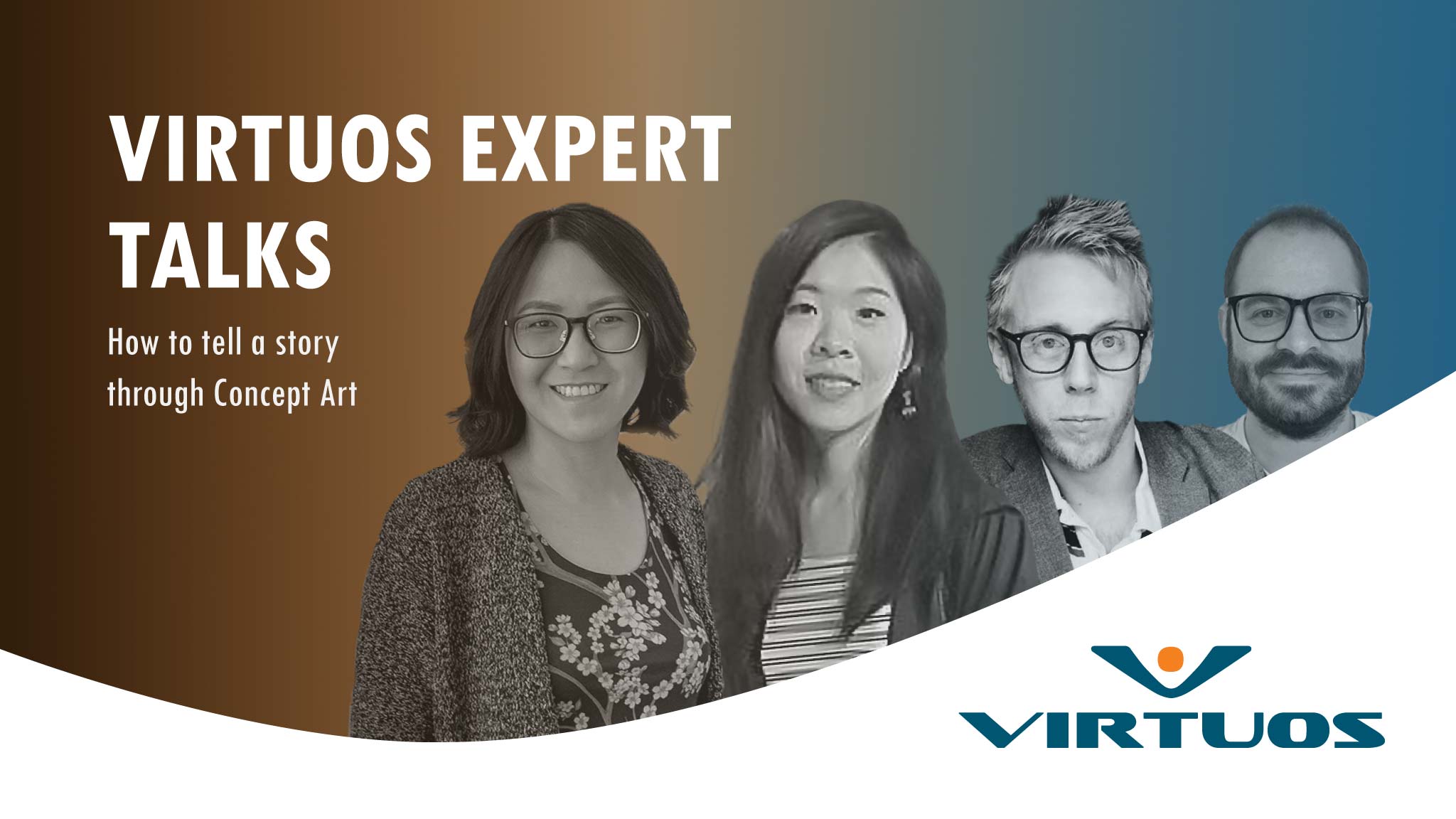 Virtuos Expert Talks Webinar: How to Tell a Story Through Concept Art

This event is part of a webinar series of Expert Talks organized by Virtuos, aimed at industry professionals and enthusiasts alike to discuss topics revolving around the future of game development.

Concept art is one of the most popular artistic fields in the games industry, but it’s often misunderstood to only be all about creating beautiful and polished illustrations. In reality, concept art is about ideation and using art as a tool to tell a story. Concept artists are responsible for being the “brain” of art projects, helping modelers, visual effects (VFX) teams, animators, and other art teams visualize project ideas to be developed for production.

In April, we ran the third session of our webinar series, themed “How to Tell a Story Through Concept Art”, discussing the role of concept art in storytelling in games and film. The webinar featured the following industry veterans who shared their insights on how concept art is used in a project: 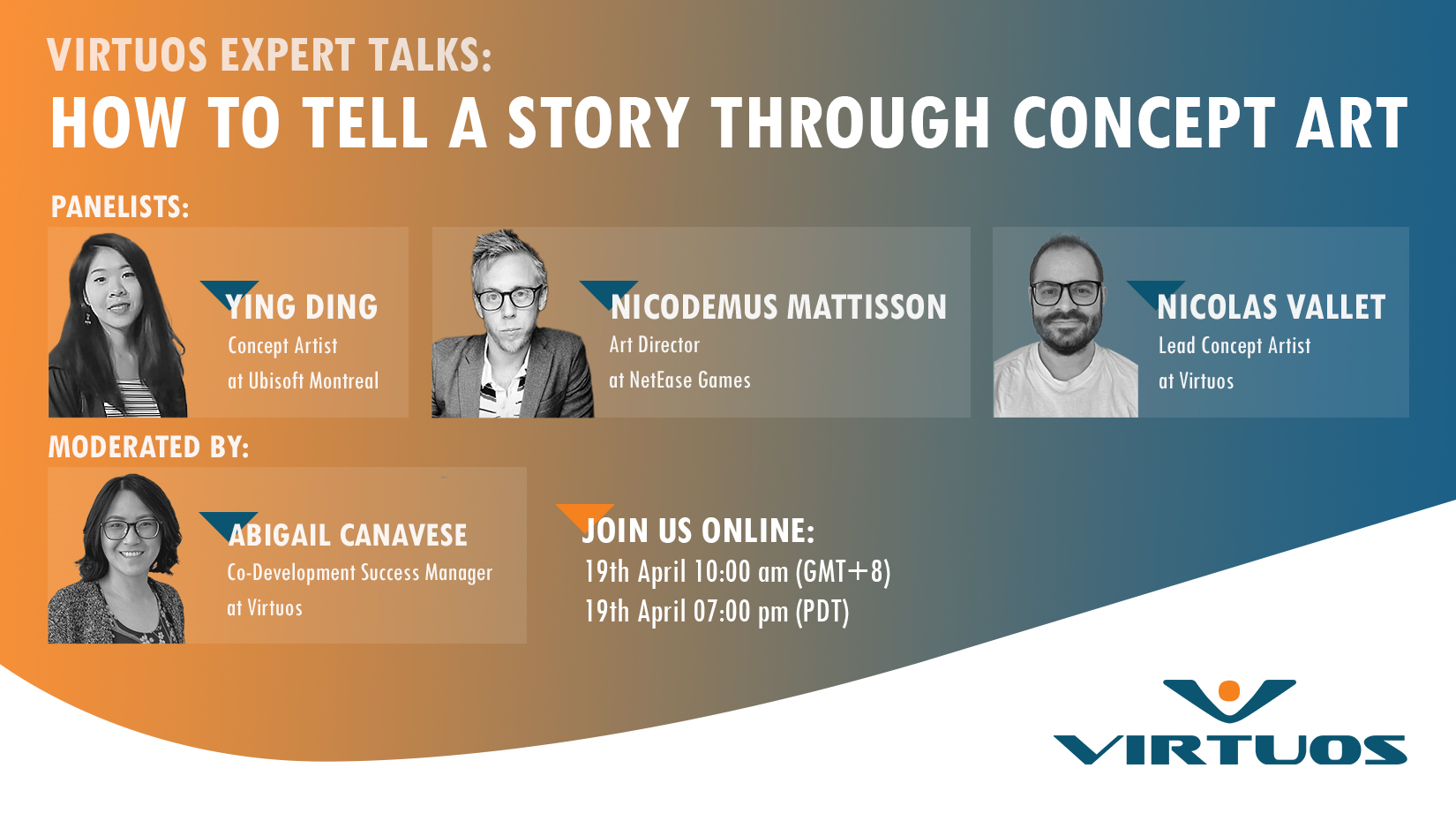 Expert Talks Webinar: How to Tell a Story Through Concept Art

The Role of Concept Art in Storytelling

Ying, who currently works at Ubisoft Montreal, shared that concept art is essentially a problem-solving tool in game creation. However, the role of a concept artist when it comes to storytelling, she added, is to inject extra emotion into the narrative, while giving enough information and instruction to the people in the next step of production (e.g. character modelers) to create the finishing product.

Nicolas, a lead concept artist at Virtuos Montreal, shared that concept art is mainly an umbrella term for any image-based design work, and can happen at any time in the project from pre-production to post-production. “Knowing where you fit lets you know what information is important for you to convey,” Nicolas said. “Concept artists are there to ‘fail’ faster and cheaper – rather than starting a whole production, you’re going to get one artist to draw for one or two days, get back some ideas, instead of going through a full production cycle to know if it works or not.”

“Essentially, concept art is often the first step in translating an idea into image, and it is as much about finding a logical solution as it is reflecting the culture, history, and story behind the piece.”

Nicodemus, an art director at NetEase Games, explained that the role of concept art isn’t only to nail down the content in the image, but to shape the frame of the image, and to understand what components go into it while making use of art fundamentals to create a compelling visual. “Concept art provides the visual understanding that may not be all that apparent to another artist later in production, almost like a “visual oracle” of sorts,” Nicodemus shared.

How to Collaborate to Explore a Story to its Fullest

In the context of working in a larger team, the speakers discussed what it was like collaborating with other game developers as concept artists to explore and expand on a story. “An idea is perfect until it is tested, it’s going to make sense when you write it down on paper or when it’s in the designer or art director’s head. And then, when you actually get to draw it, you realize how many adjustments you have to make,” Nicolas said. “There’s a need to be very reactive when you’re doing this – choosing what information and elements to prioritize, and understand what is within the realm of possibilities.” Nicolas further explained the importance of using this reactiveness to create a feedback loop with the designers, writers, and clients, to help reflect their idea clearly into a visual that can be pushed into production. 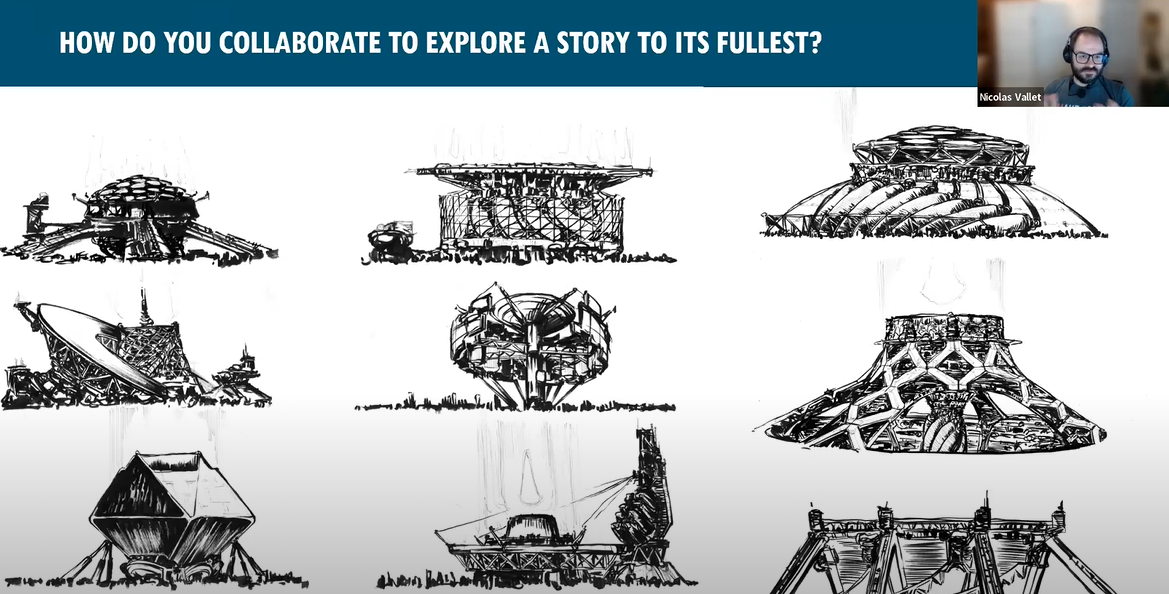 Nicolas explains how concept artists collaborate with other developers

“We (concept artists) are only one step in the process, and we need to know if things fit within the possibilities of the project,” Nicolas added, stressing the importance of knowing what comes next in the production. “‘Can it be modeled? Can the engine support it?’ These are important questions to ask to ensure that your choices stay relevant until the final product.”

Another key highlight of the webinar was the discussion on how to convey a clear story through concept art. Ying laid out the basics of visual communication – ensure that your information is clear and that you have a good understanding of the story before starting. “Write down your ideas, don’t rush into your drawings, and do a lot of research. That will help make your drawing a lot stronger than if you just went straight into it,” Ying shared. She elaborated on the relevant types of background research, such as human psychology and color theory, adding that such information would help a lot in composing a more thoughtful piece.

Nicodemus chimed in on how ambiguity serves a purpose in conveying a clear story. “Less is more, and it allows the viewer to fill in the gaps with their own stories,” he explained how viewers will always apply some level of interpretation to a piece of work. He elaborated further on Ying’s point on the importance of background research, encouraging the efficient usage of archetypes and typologies as tools to help the audience identify visual elements in an art piece. 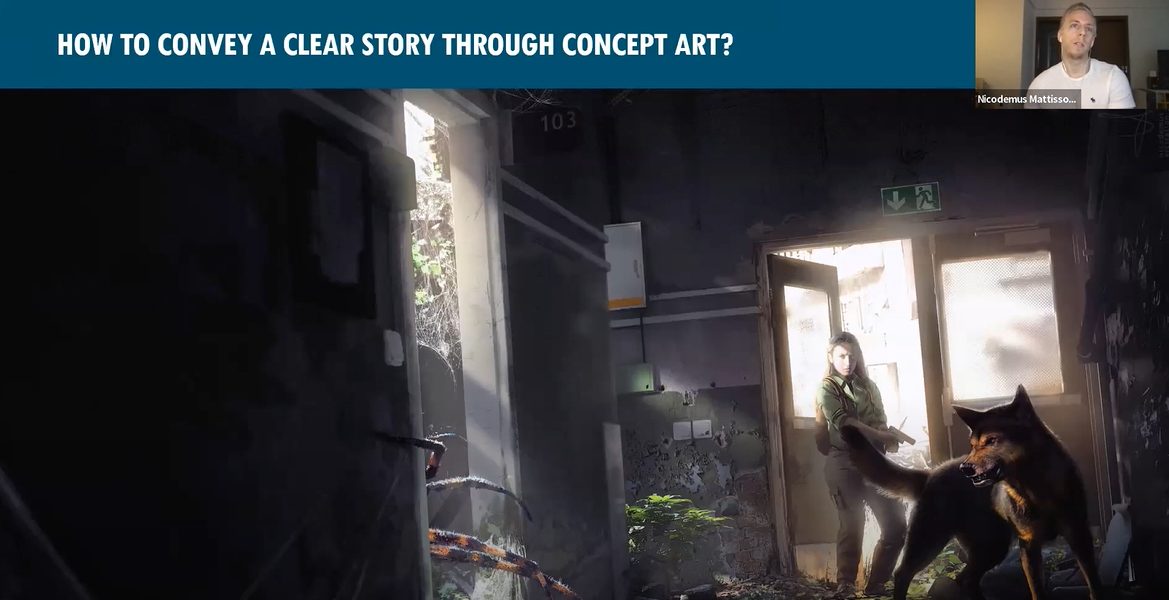 Nicodemus talks about using typologies and archetypes to convey a story

When asked about the amount of detail required to tell a story, Nicolas emphasized that the clarity of intention is key, rather than the amount of detail. “Concept art is often about suggesting rather than solving everything, 100%. If you have a very efficient team that’s able to understand what you’re doing, the most random scribble can also be understood,” he said. He stressed the importance of “focusing on clarity and trimming the fat” and focusing on what must absolutely be done rather than the distractions around it.

“Focus on what you need to do, and avoid the trap of adding “cool” things everywhere. If everything is meant to look cool, nothing will be at the end because it’s all going to be at the same level.”

Virtuos would like to thank all speakers and attendees for participating in our webinar. We hope it was an insightful session for everyone and look forward to advancements in game creation, making the games we develop better together.